Unearthing facts is about delving into diverse stories. The 'truth', like Nature, has many facets so we looked not only to recorded, researched history...but listened to those whose wisdom is best passed through storytelling. 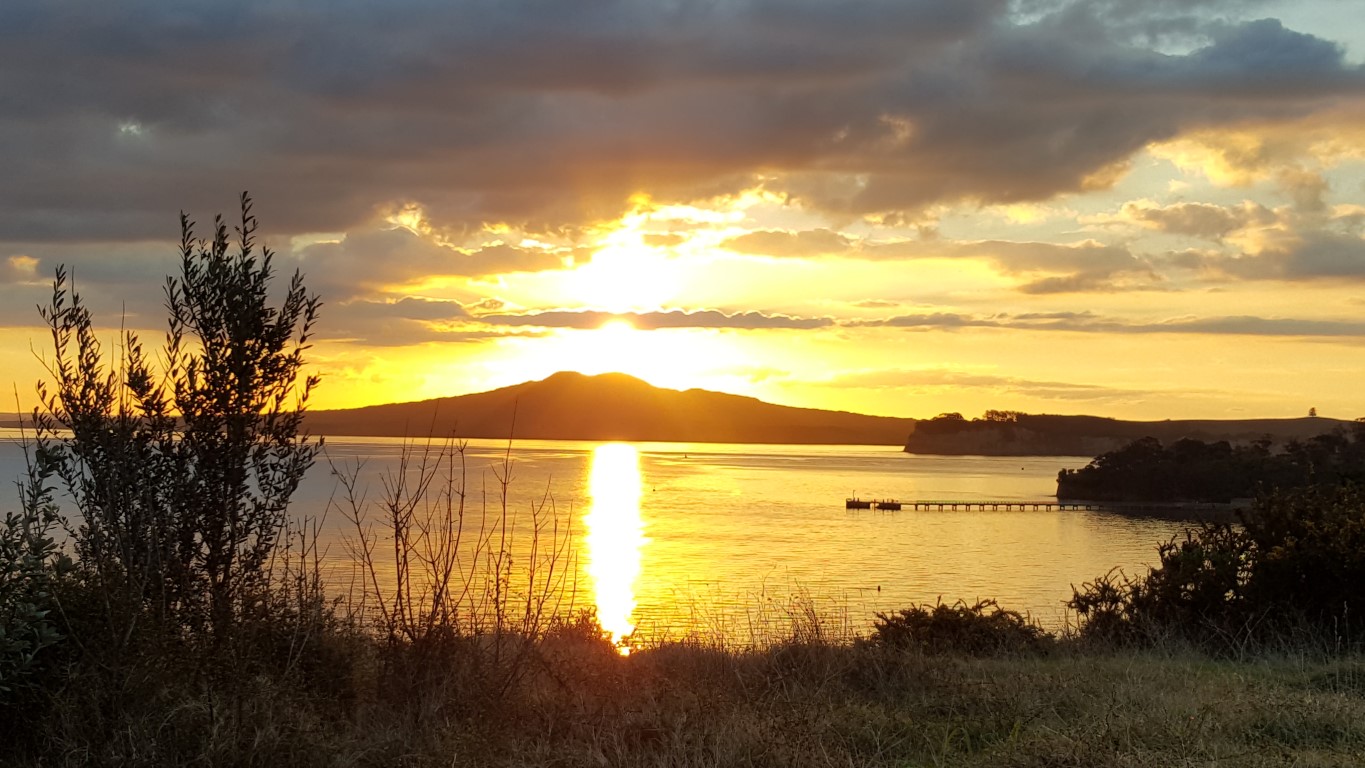 New Zealand is part of a mostly submerged continent called Zealandia that broke away from Gondwanaland, sank and was then mythically fished out of the sea by Maui. Most of our local rock is sedimentary sandstone and Greywacke that contain fossils, demonstrating that the land was once under the sea.

Auckland has nearly 50 extinct volcanoes, with the largest, Rangitoto erupting only 600 years ago. According to Māori tradition, the volcanoes resulted from a battle between Waitākere to the west and Hūnua to the east of us. The Hūnua tohunga (priest) made the sun rise early to blind the Waitākere warriors, and Waitākere retaliated with a bombardment of volcanic explosions.

Starting with the original, mythical "Kui" or people of Maui, according to A. A. Lind,  our land may have been populated as early as a few centuries B.C. by people originally from central India migrating through Polynesia. They were followed by several waves of invaders who mostly wiped out the previous inhabitants. As John White explained in his 1887 publication, The Ancient History of the Maori,

But, again, a people called Turehu (sleepy, fairy-like people) came from the other side of the ocean, and landed on the “Fish of Maui,” and attacked the Tutu-mai-ao in the same way as they had dealt with Kui, and intermarried with the Tutu-mai-ao, and soon took the sole power and rule over the land, and Tutu-mai-ao became exterminated. And, again, there came a people who were descendants of the Maui line of ancestors, to seek for the land of Maui, who were called Maori (ma-ori, by the breeze), and when they had lived ten generations on the land they acted in the same way to Turehu as Turehu had done to Tutu-mai-ao, and Turehu became extinct...

These ancient people were probably responsible for the Howick standing stones on Stockade Hill. 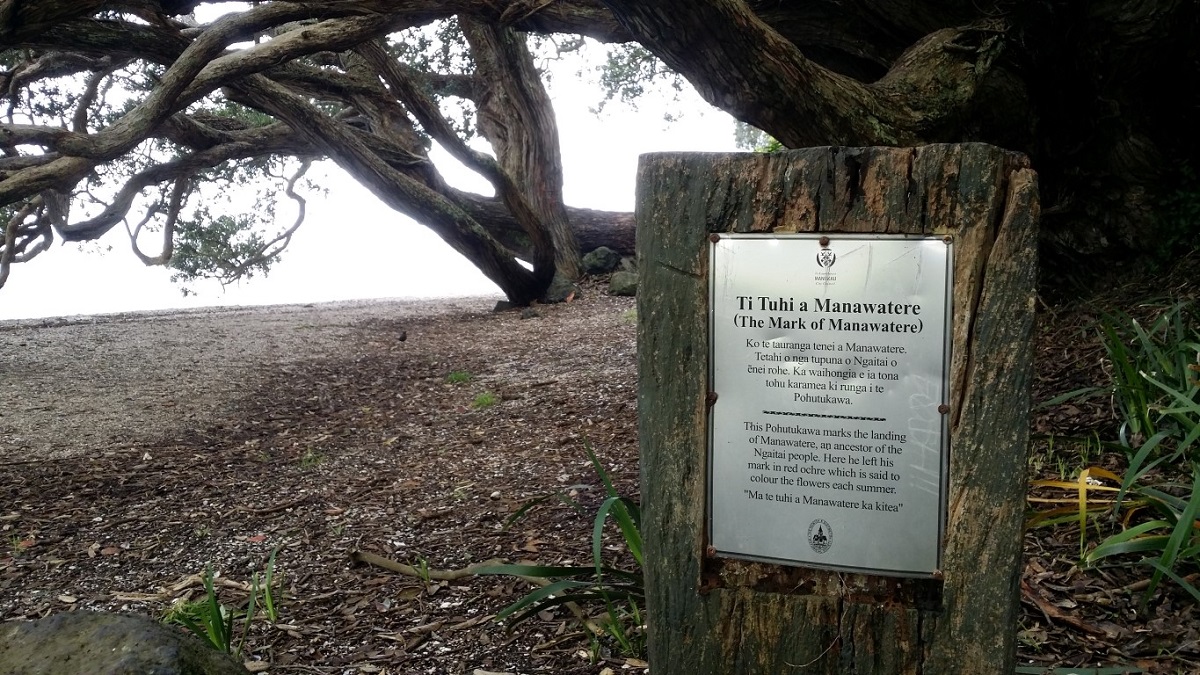 Legend has it that Manawatere came from Hawaiki, he did not come in a canoe, he glided over the ripples of the waves, and left a mark on a Pohutukawa tree on the beach at Cockle Bay just to the east of Tanglewood (see plaque on right). Early decendants of various canoes settled in the Tamaki area around 1350, and the local Ngai Tai tribe arose here primarily from the migration of the three sisters from Torere in the East Cape area.

Ngati Paoa established themselves nearby in the Firth of Thames and eventually extended around the Hauraki Gulf, including Motuihe which Tanglewood overlooks. Ngati Paoa had a number of fortified pa sites around the region that were defeated by Ngāpuhi in the early 1800s. With the advent of muskets supplied by the early Europeans, fortified pa sites became untenable, but the region was still used by Maori for collection of food. 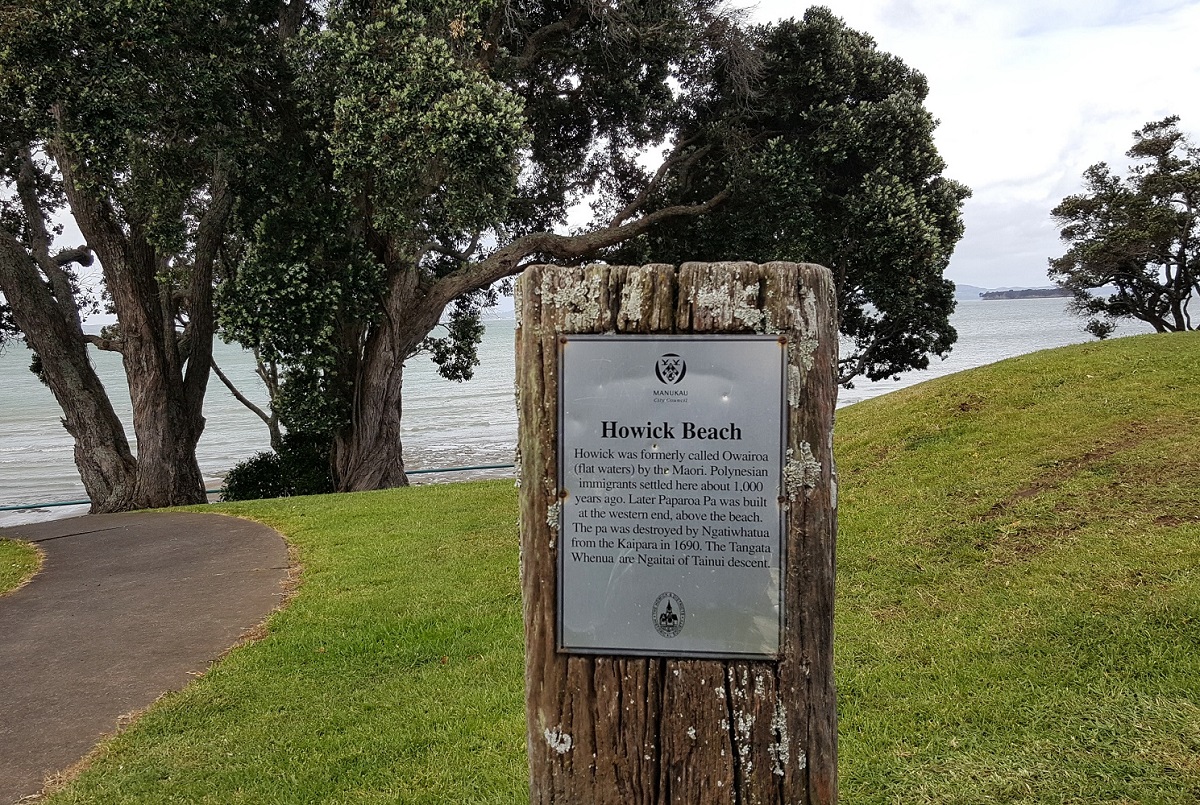 Howick was formerly called Owairoa (flat waters) by Maori. Polynesian immigrants settled here about 1,000 years ago. Paparoa Pa at the western end above the beach was destoyed by Ngati whatua... in 1690. Current literature states that Tangata Whenua are Ngaitai of Tainui descent, however, further studies into Ngati Kohua are not clear.

This plaque at Waipaparoa, Howick Beach, is one of many stories. Research continues as stories differ about which and how various hapu claimed or used the beach area. Documentation regarding the Fencibles (see below) is abundant and well researched.  The story that precedes that period sits in the hearts and minds of many who are gone, and others who hold the pain of events involving inter-tribal riffs and colonisation. The 'truth' is most often heralded by the victors.

With our commitment to the land upon which Tanglewood rests, we contacted Taini Drummond, guardian of our local Maori educational center, Whare Matariki. Just so happens Yoshimi studied Te Reo (Maori language) under Taini's tutelege in the early 1980's, so it was a wonderful re-connection.  Taini is a very kind, wise and knowledgeable Maori leader who has patience and commitment like no other. Taini is a powerful facilitator of peace and meaning.

Through Taini, Jon and Yoshimi were introduced to Phyliss and Kelly, beacons of mana whenua.  Together Taini, Phyliss and Kelly walked, sensed and felt the land around Tanglewood. Over time, we listened, learned, cried and were inspired...together.  The stories are many. They are not written down. Sharing stories helps to release the pain and move on. Tanglewood will continue to acknowledge, respect, restore and facilitate meaning and relevance. In researching for the LBC Place imperative, we discovered the "Purple Circle". That story is below.

The Fencibles were retired British soldiers, "still capable of defence" who enlisted as a military reserve in the colonies. In 1847-1854 they immigrated to Auckland with their families and were promised a cottage and an acre of 'fenced' land that they could retain at the end of their 7 year term.

As stated upon a plaque atop Stockade Hill, Howick, 'defence' included the supposed need to protect Auckland from Maori.  Interesting considering the distance from Howick to Auckland. One must wonder...

Paparoa seems to be the Maori name in the early 1800s, in the area Waitemata Wai-O-Taiki. Interestingly, the meaning refers to a ceremonial place of honour for Maori customs pertaining to birth and baptism, or possibly flat rocks.

Howick was the name of the place when the first Europeans settled here in 1847 and named after Viscount Howick, Henry George Grey who, as secretary of state for war and the colonies (1846–52), pursued a policy of self-government for the colonies.

In the 1980s a large number of Chinese immigrants prompted the nickname, Chowick. With the influx of South Africans, Chowberg was another nickname mentioned.  All in all, diversity fuels synergy...Howick and surrounding suburbs have become a dynamic melting pot of cultures including a more respectful openness to Maori culture. Thanks to the perseverance of leaders like Taini Drummond and contributions of Whare Matariki to the local landscape, diversity is, in fact, fuelling synergy.  Mind-sets are shifting about who we are and who we need to be for the sustainability of humanity and the environment.

Why so many address changes?

When Jon's father built Tanglewood in 1950, the address was 14 Rangitoto View Road, Howick, Auckland. With the growth of South Auckland, Auckland was replaced by Manukau City.

In 2010 amalgamation created one Super-City, the address changed back to Auckland, the postcodes re-organised, and the address shifted from Howick to Cockle Bay.

Waipaparoa The Ngai Tai treaty settlement in 2015 includes renaming Howick Beach to Waipaparoa/Howick Beach. So, for the re-birth of Tanglewood, we have decided the address will be: 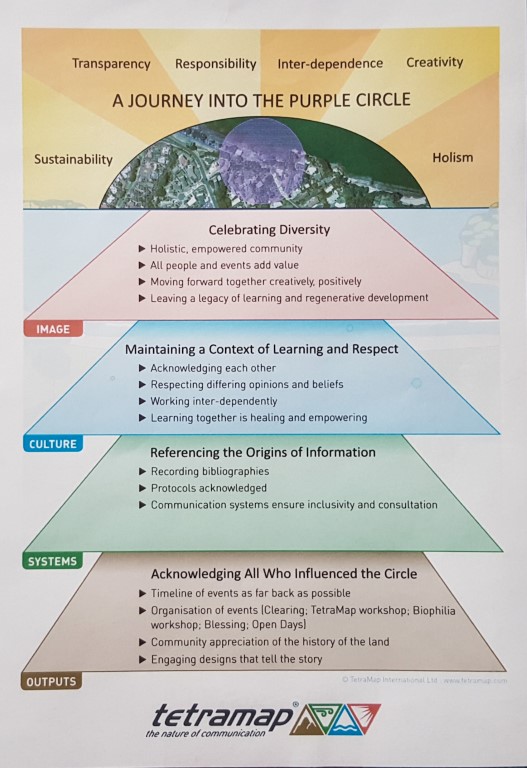 Tanglewood sat in a purple circle that designated it as a "site of significance to Mana whenua" (indigenous people of the land). 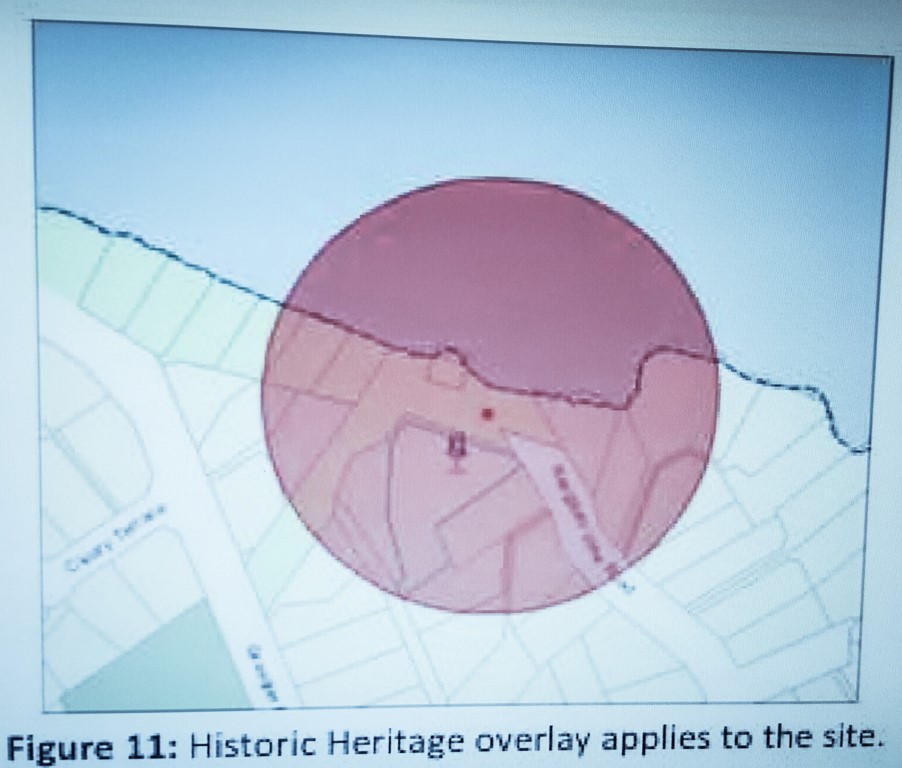 The graphic to the right was the outcome of a TetraMap visioning process to guide us in our voyage of discovery about mana whenua.  We realise there are many stories beyond those recorded by historians. Our commitment to the whenua upon which Tanglewood rests is to share all the stories on a path that will heal the land and the peoples who have come and gone. Our desire is that Tanglewood will welcome all those who stay and visit, to rest well on the land for years to come.

Photo below: Pity the site's significance has never been understood by our Councils. In the 1960's a sewage pumping station replaced a magical swimming hole. Pity also the lack of understanding and acknowledgement of mores of the indigenous people of the land.

Local news from the 90's continue to challenge Maori's sense of place and culture in our community . 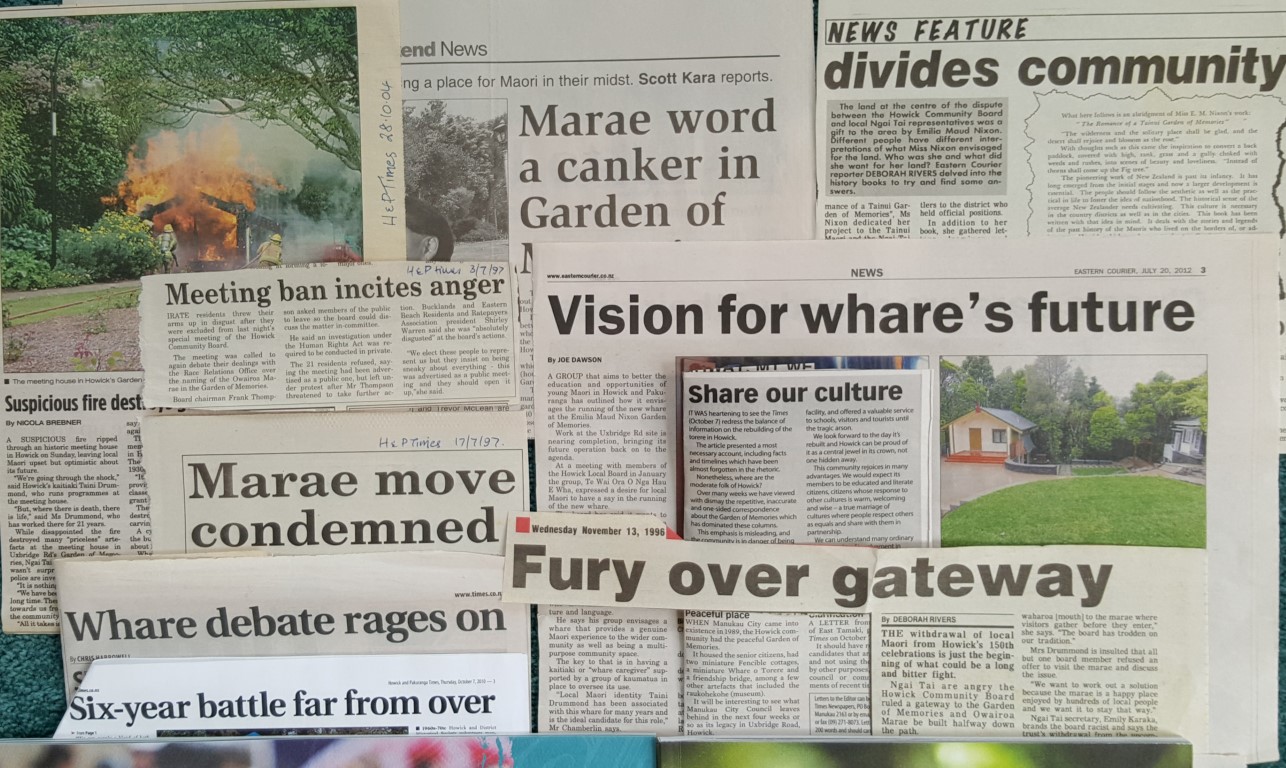 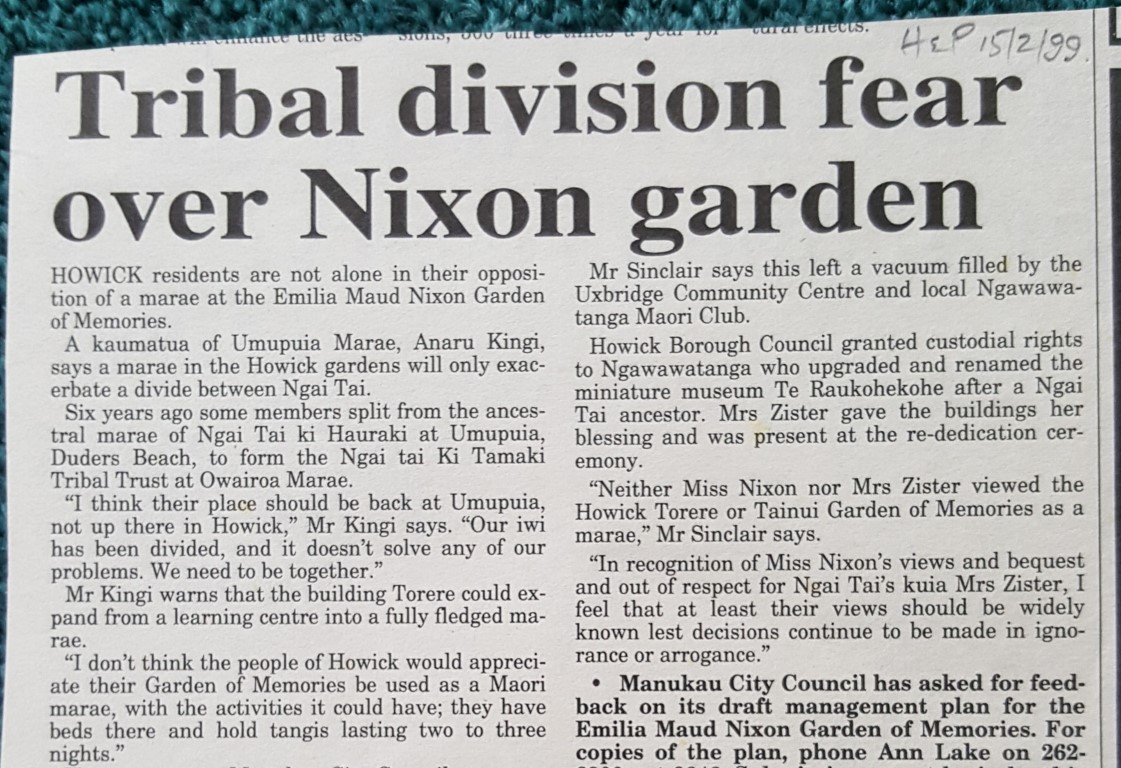 Next: Plan and Prep for LBC